Here ist the story of finding a new type of the Valjoux Skipper. 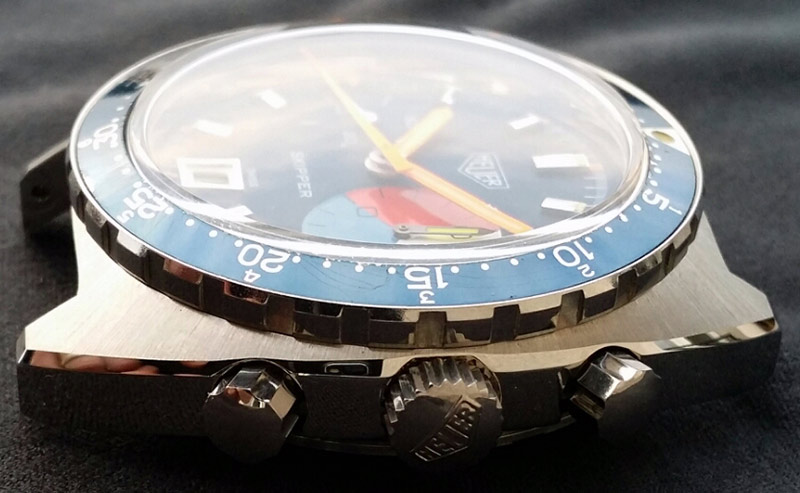 It started with finding a picture of a Valjoux Skipper that shows a difference – the colors of the subdial…. 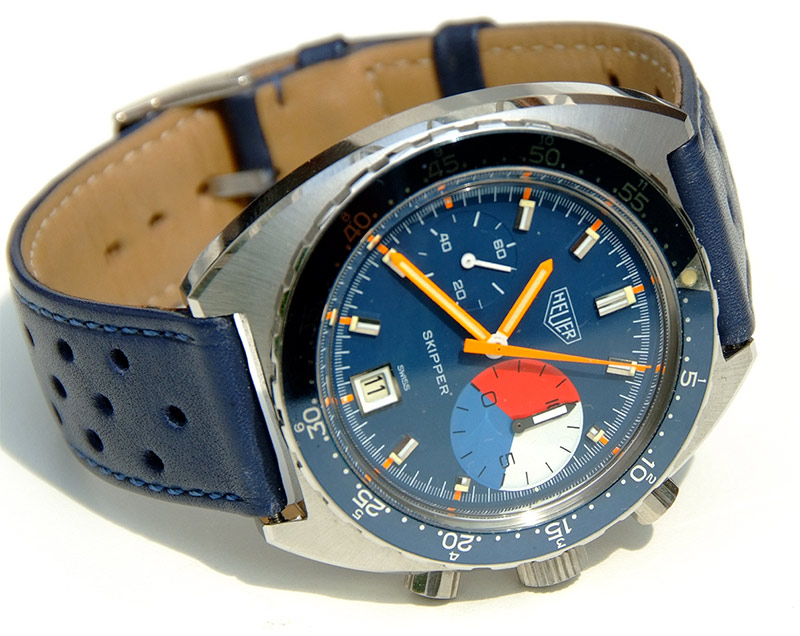 That one had another subdial color and register number arrangement then the other ones you can find on the most dials:

OK, could be a fake or whatever… no deep thougts about this one.

Step two – found the Skipper in the Heuer archives on LCdF.

On a closer look you can see the different register 5-0-10 with white-blue-red. AND – another case style too!

Now remembered the first found and start to wondering about.

Step three – some month later there was the third thing and the bell rings: found the next Skipper 73464 with the different later 73463 Valjoux case and the 2nd register arrangement!

Remembering the first picture (saw on onthedash.com) and try to find out who could be the owner. Found him in the cool group of my onthedash friends and he gave me the serial of his Skipper and additional pictures – thanks to Shaun! 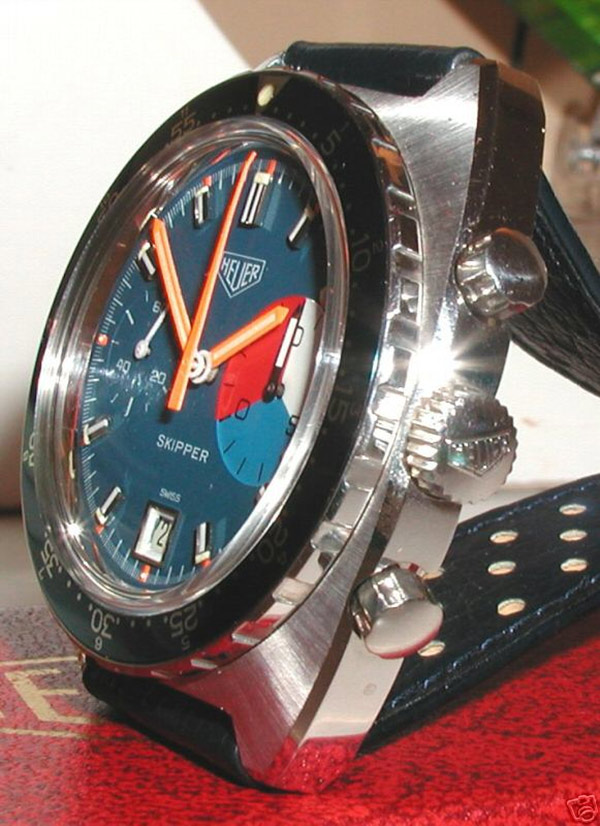 This one will have an own column later in the Skipper Grid.

Here are pictures – you can easily see the difference. 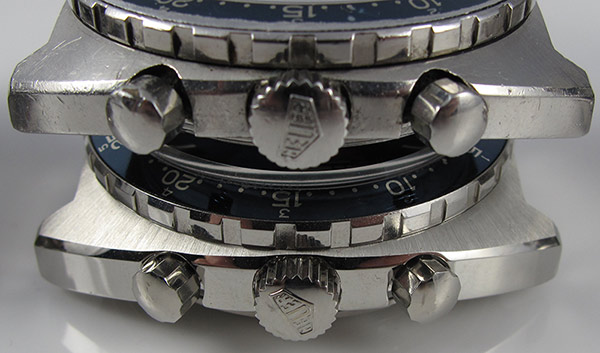 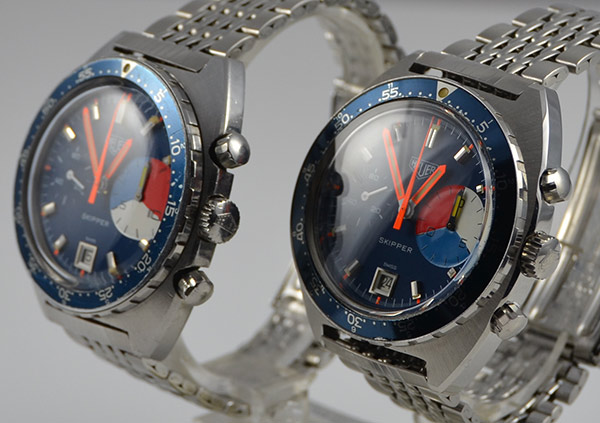 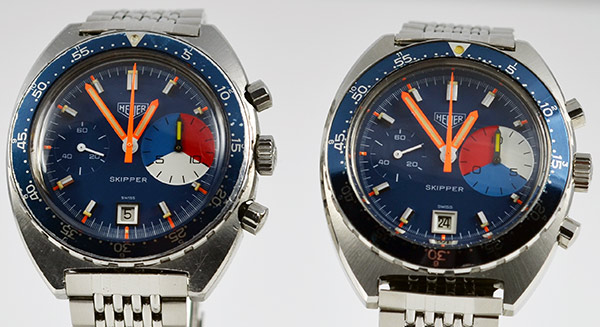 What causes the different cases with the same reference?
Could be the fact of using two case suppliers: Schmitz and Piquerez.

Was that the same with the manual Autavias at this time?
Maybe there were some cases around and Heuer let make some new Skipperdials for a late Skipper bunch?

Update: Paul published a nice picture of his manual Autavias with a look on the pushers – there are some!
With the knowledge of the serials man could find a rule… 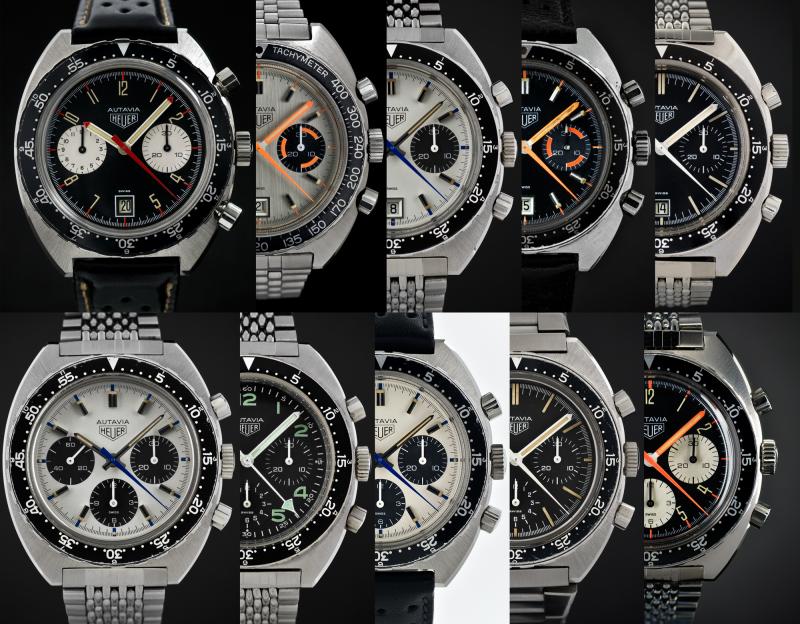 Why are the colors and register changed on the subdial?
To explore: regatta rules changed? or there was a new designer of the dial? Or a yachtsman found out the colors better match to some flags or sign on the regatta?

The dial with the overprinted Heuershield can fit in that scenario too – have the same subdial like the 73464 late! 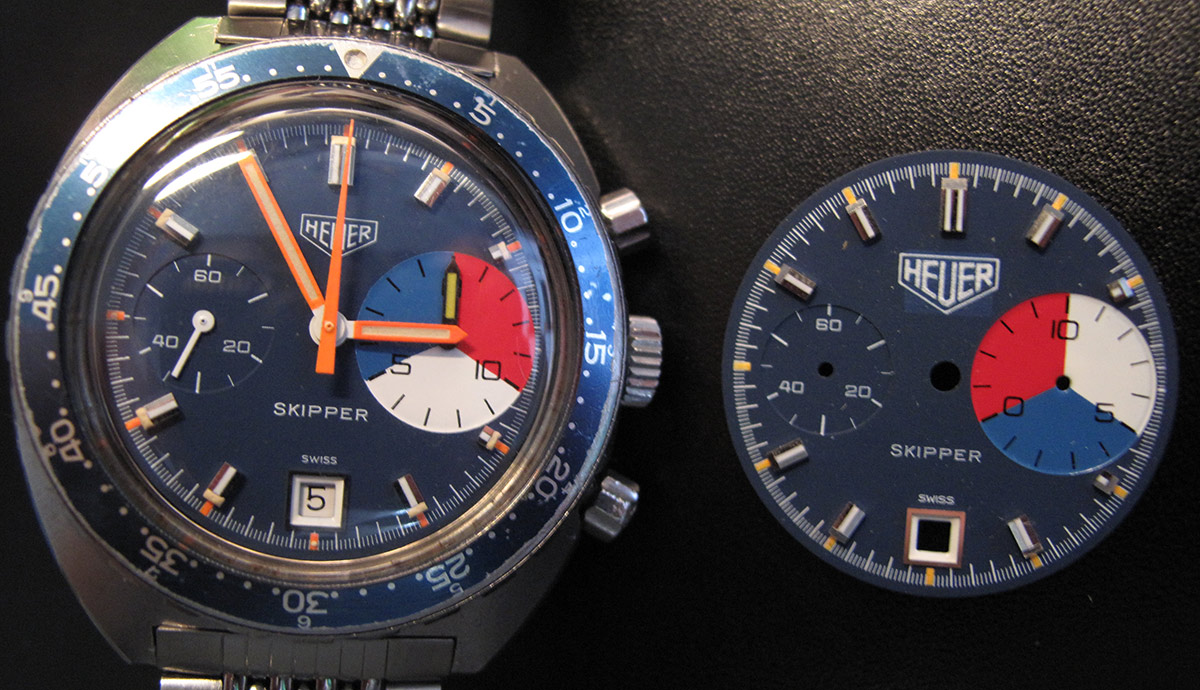 See the differences:
– color is white-blue-red instead red-white-blue and
the unusual 5-0-10 register and
the Heuer shield is on a overpainted blue sqare printed much bigger then normal.
Could be a dial sample or prototype?

We will find out the truth someday – or not ;))

Another one, Number 5, is found and keep the proof. Serial and colors of the Regattaregister are in line as known. Pictures will follow later.

And Number 20 is popped up in Australia! Welcome on board!