Wrong vs. Right – about genuine parts and watches

It´s not everytime “not genuine” if some parts are not the same as shown in catalogues or the same like on other watches.

Best example is the “Prototype Autavia Skipper” – often the buyer had the chance to assemble his watch from the stock – bezel and strap or bracelet of course, sometimes hands too.

Here are some “unusual” Skipper models with different parts on it. And please – there are not even “Fakes”, there are possibly some parts unusual and sometimes you never know…

But you can find from time to time Skipper was built together with parts from different Skipper. As far we have seen a 15640 blue Skipper with black dial as shown in Example 3, there was a 1564 blue Skipper with a black dial last time on a german dealersite too and you find often wrong hands and bezels on the Skipper (black Autavia bezels fits perfect on a Skipper – but are wrong there).

Examples
(Please compare with other watches at the gallery!)

First a very nice 7754 Skipperera. All original but the orange hands are never seen on a Carrera (and on a Skipper 7754).
Shouldn´t be the hands of metal? But these orange looks nice and are often used by later Heuer (Autavia) – but then they need to have other dimensions… so it´s an open question already. 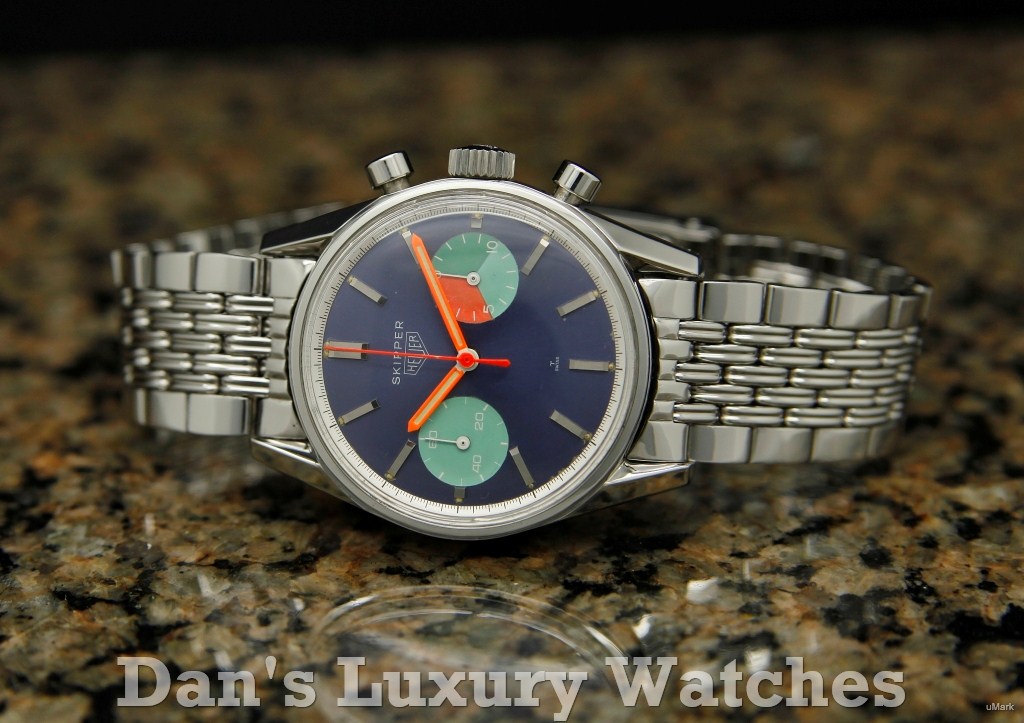 The next Skipper 7754 got black stripe main hands. Usually used on 7753 Carreras – but not on Skipper 7754, they all have steel Carrera hands from the earlier executions. 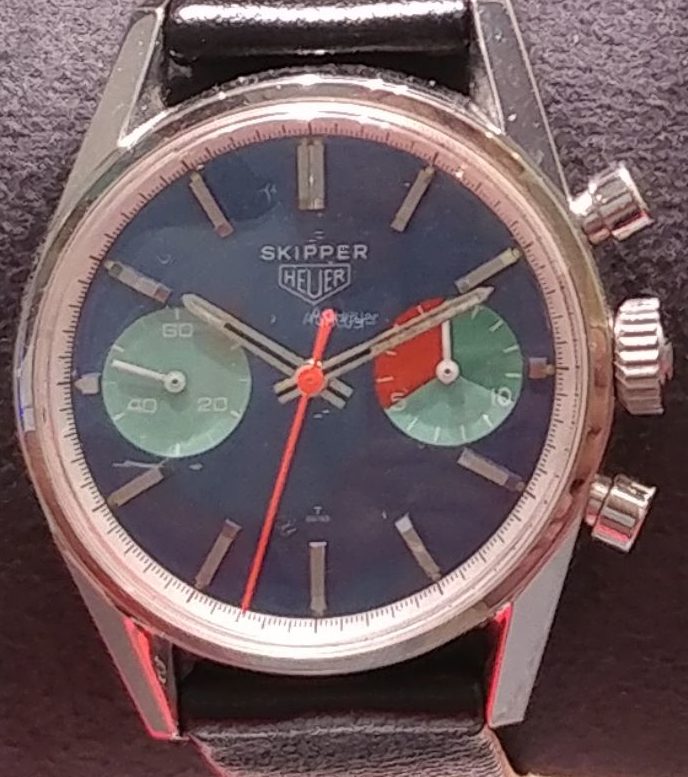 The 3rd Skipperera got a white sweep hand. Normally all Skipper 7754 got orange second hands. 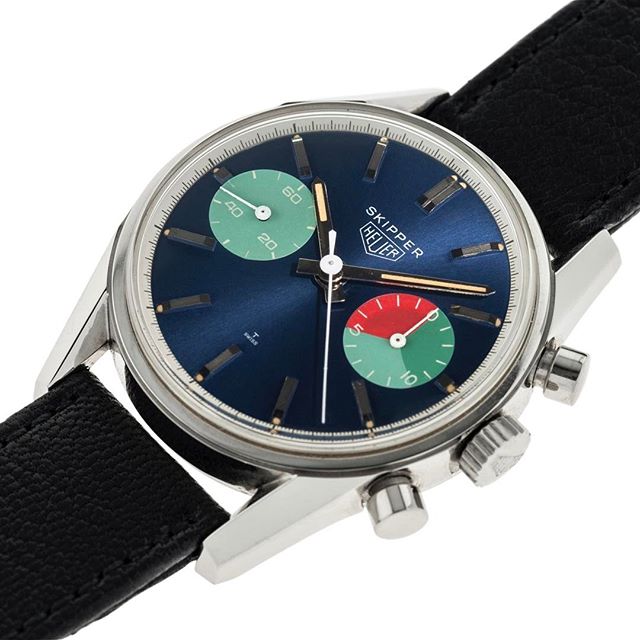 the “normally” used glass for the 73463 cases was a plexi with an edge. We have to proof that. For example: early manual Autavias 2446 compression case got a domed glass instead of the edged ones on later editions… 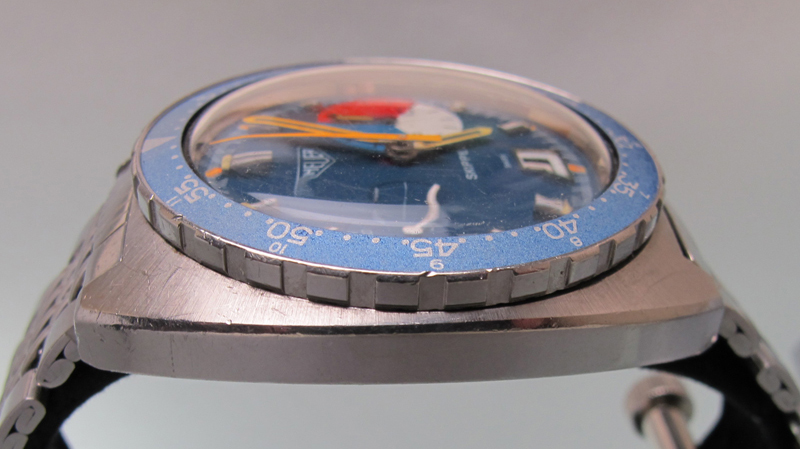 Example 3: This stunning Skipper have a 11063V case – so it should be a “black late” Skipper. But normally there is a black dial – will fit with the white hands and the black bezel. 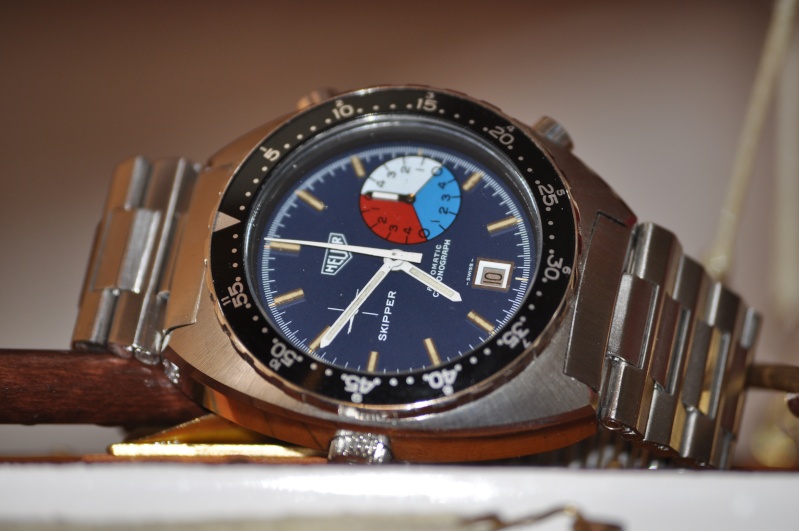 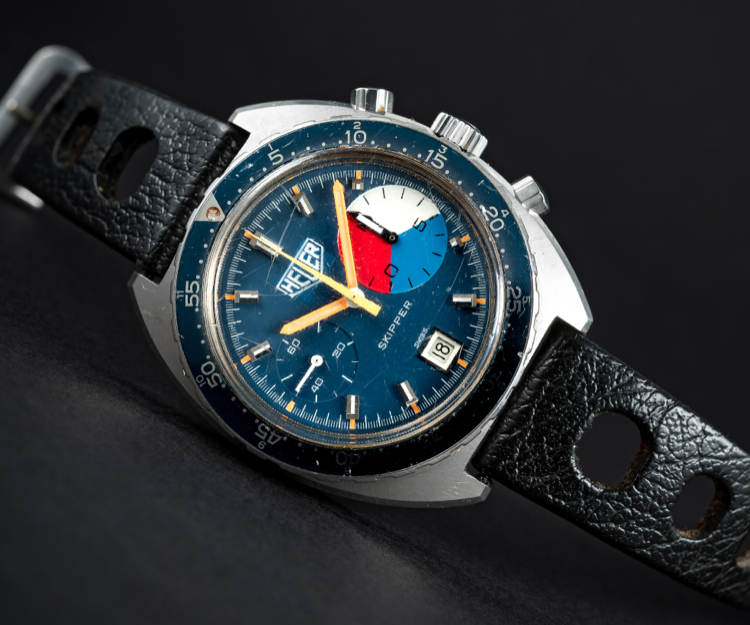 Personal opinion: Yes, kind of rare with a test dial. Or how WoK says: “WITH VERY RARE OVER PAINTED HEUER SHIELD DIAL”
We have seen 3 dials with that print. You can see the old one under the new shield btw… we never seen one Skipper with that dial built in and we´ve seen a lot of Skippers 😉

Nobody knows how and when but it seems a rare later 73464 from the serial but we cant say if the case is the right one from that angle (pusher will let know that). Who knows what happened to that watch. Please look good and inform yourself deeply before you bid on something like that.

Example 5: 2Skipper for sale on chrono24 offered from Juwelier-Sander.de 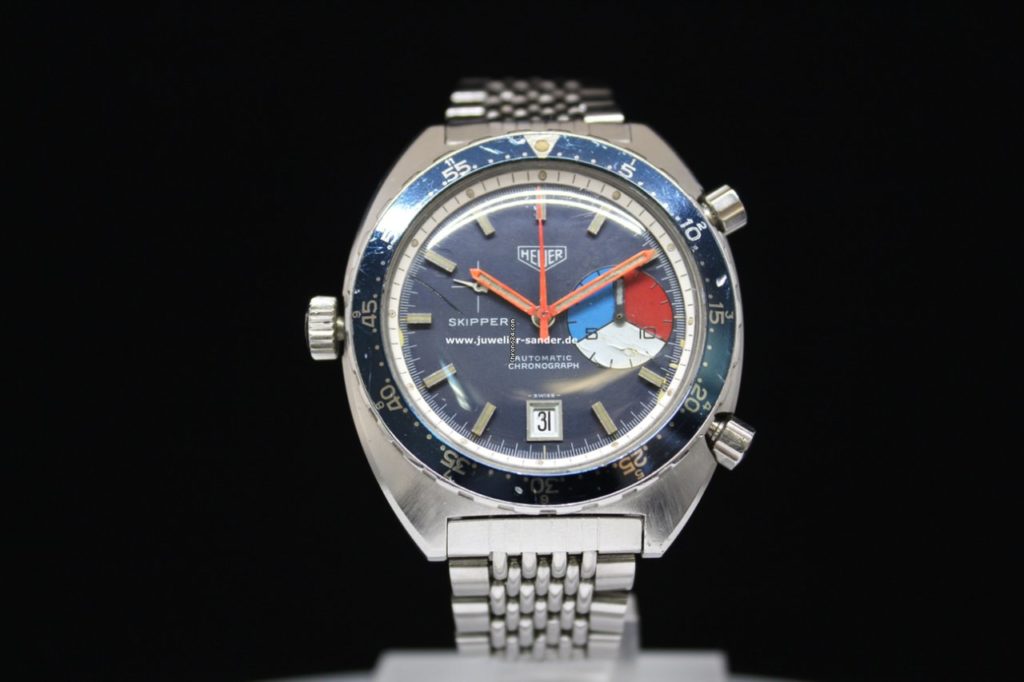 Case looks a bit polished (not sure), bezel, dial itself and hands looks genuine, but dial seems damaged (inside subdial). But please, what inside bezel or tension ring is that?
Definitely NOT Skipper legit! So please be sure you got the right glass with tension ring if you buy that. And check the crown. And to be real sure what Skipper we have here I would ask for serial and case reference, that they could find between the lugs. 1163 needs plexi, 11630/15640 needs mineral glass…

You know deeper facts or got other examples? Please write a message!

What else is around? Some hints for looking if all is right on your wanted Skipper:

Dials, case & bezel
There are some Skipper with wrong dials for the used case – black dials in case of blue Skipper, blue dials in the later case for the black Skipper.
The bezels are different. On the fist Skipper (Valjoux 73464) man can find bezel without the dot on the 12, all other should have one.
Most aftermarket bezel inlays don´t hava a dot!

Follow the rule: look in the Skipper Grid first, compare your Skipper with the models of case references.
Then have a look at this on the calibre 15 Skipper: blue dial needs a blue bezel & black dial needs a black bezel!

The color can be faded out. But – please compare with the right series in the gallery. Mostly should be orange ones. The Lumen will never shine green – thats new lumen.
Calibre 15 Skipper rule here: blue Skipperdials needs orange hands & black Skipperdials needs white hands.

Pushers and crowns
Wrong pushers you can find (round ones) and: have a look at the crown, all crowns on Skipper should be signed with the Heuer shield!

Glass
Have a look if there the right plexiglasses with the edge in the Skipper (73464 and 1564) – round domed ones are wrong!

Movement
On the first look you will find a signed bridge. But: try at first the countdown – the right movement counts the right time! There are guys selling Skipper with a wrong movement, means a wrong minute-wheel. The right one have 2 pins!