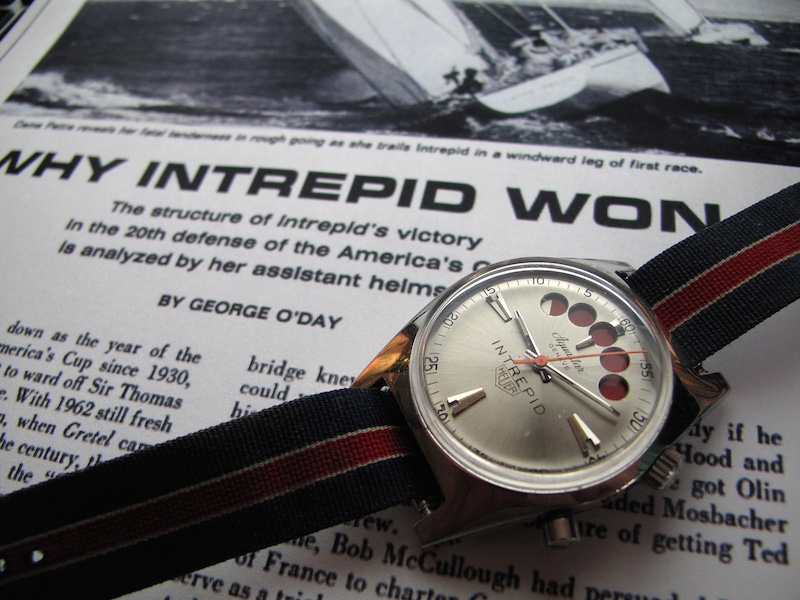 Found this till now unique watch is a step to history. It´s breathing history. Because that seems one of the first regatta wrist watches Heuer were selling, starting middle of the 1960s.

Aquastar started producing the Aquastar Regate with the Felsa 4000N calibre in the early 60´s as the first regatta wristwatch. Based on a patent in 1961 Aquastar modified the Felsa 4000N movement with a “regatta module”. That means they let build two special wheels driving the regatta disc to make visible the 5 minutes of the regatta start countdown.

Heuer starts the partnership with Aquastar in 1964 to follow the tradition in measure yachting sports with stopwatches. Here you see the advertisement for that Aquastar Heuer Regate, labeled with the Heuershield. 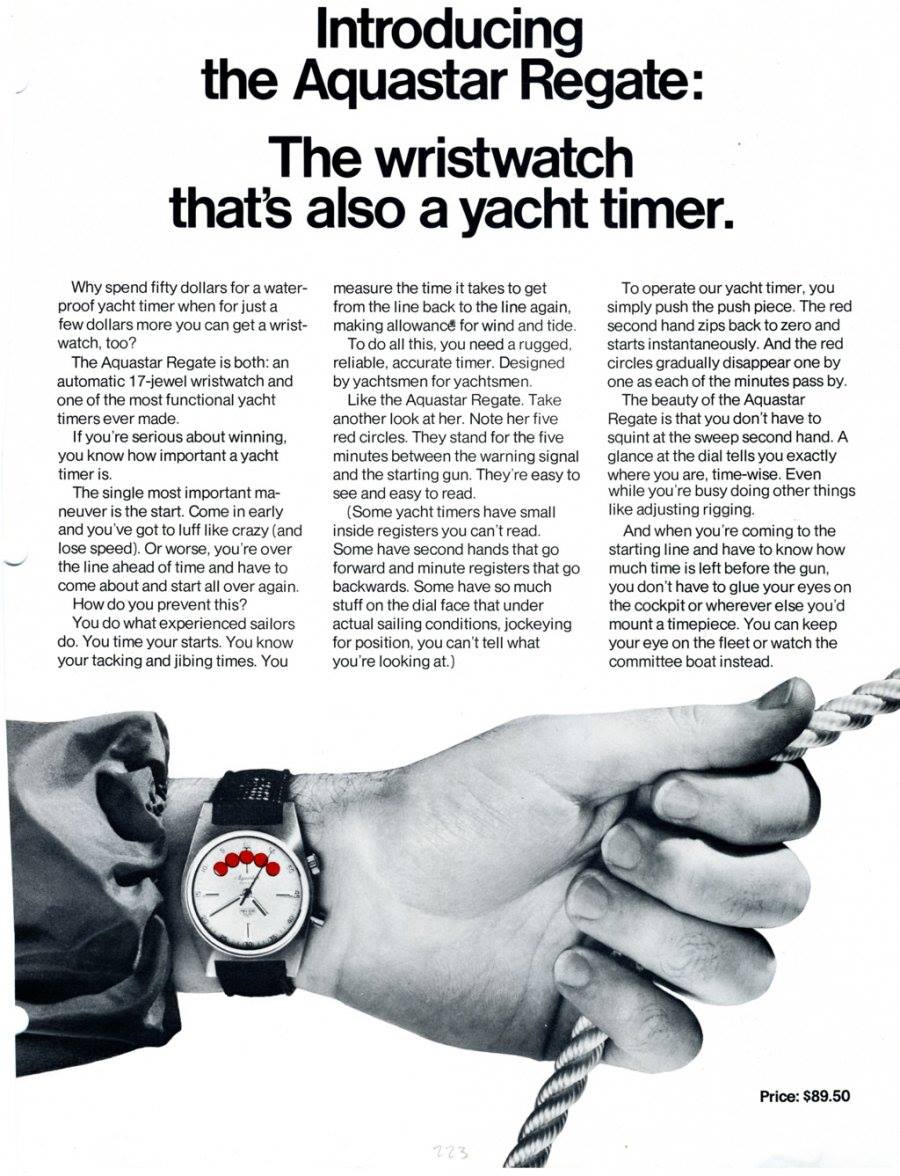 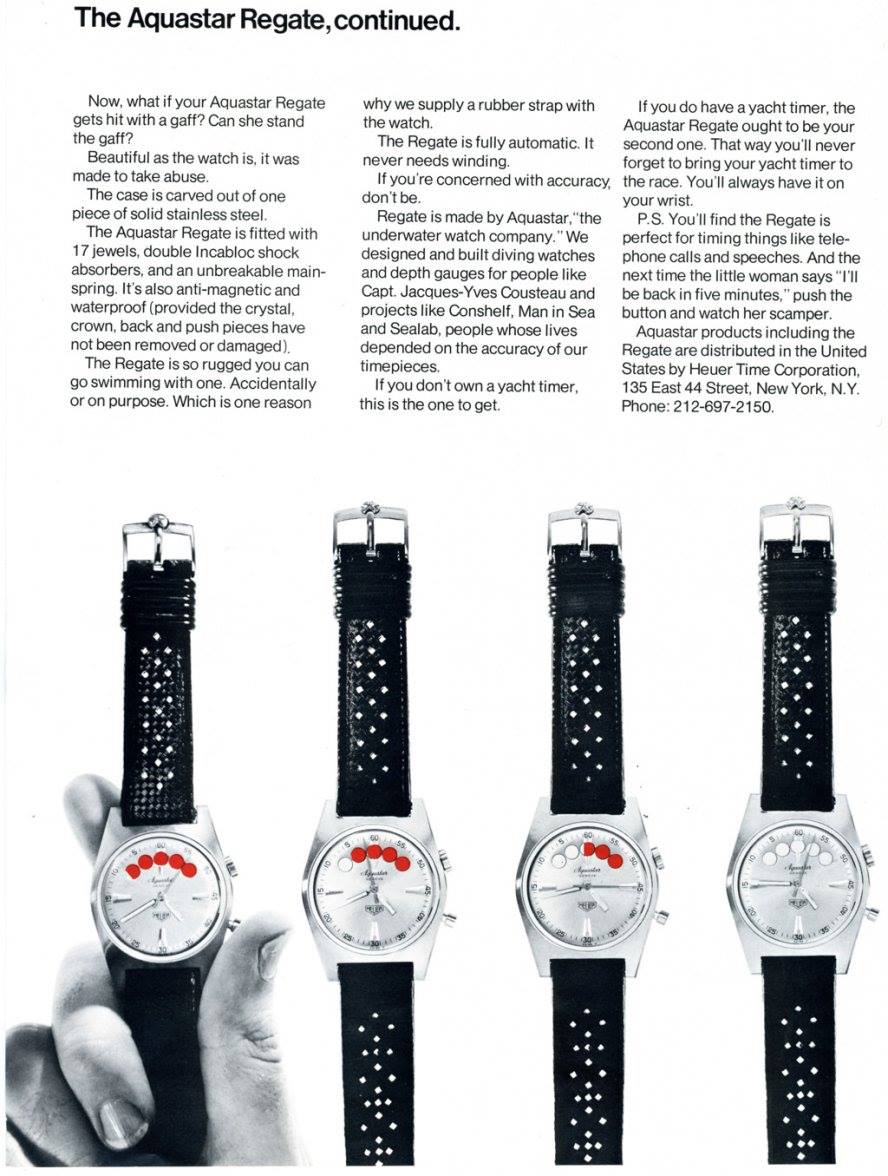 With this advertisment Heuer starts the support for yachting and regattas. So Heuer had given some Aquastar Heuer Regate to the crews during the America´s Cup in 1967.

In 1967 the ship “Intrepid” sailed by the Skipper Emil “Bus” Mobacher win the 20th America´s Cup defeating the Australian “Dame Pattie” in a thriller fight.

And the best: they had Heuer chronographs on board. 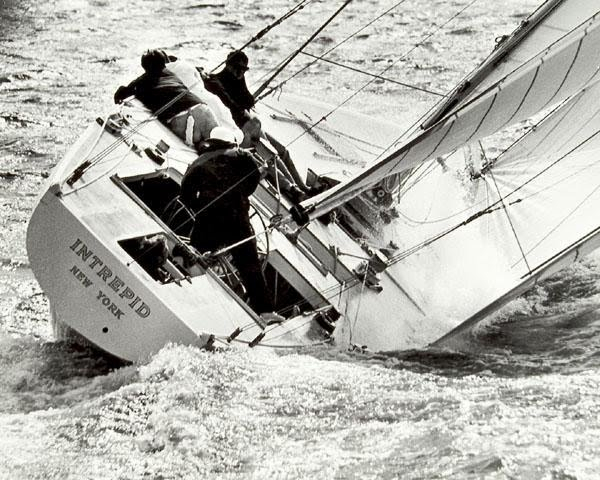 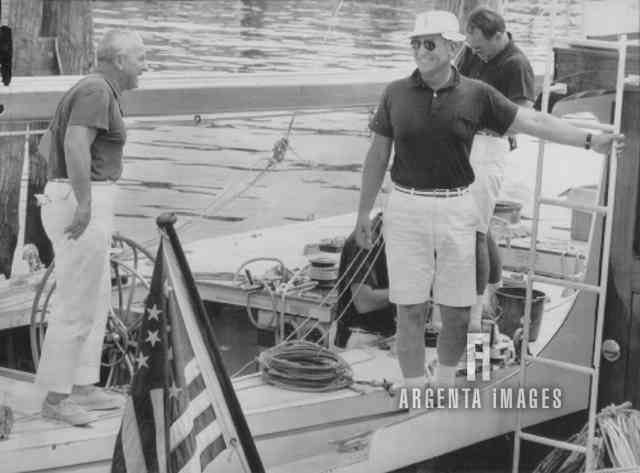 The proof of using a Heuer watch for the regattas seems to be the find of this Aquastar Heuer Regate “INTREPID”.
The serial on the back are in line with other known Heuer Aquastars, the main hands may be changed.

The seller knows, that according to the person he bought this from: “He confirmed that his father received the watch as a gift from Heuer. His father was one of the crew members on the trial horse for the Intrepid. His father was a skipper on the 1967 Constellation.”

This sentence from the sun of the Intrepid-Watch needs a bit research to understand. 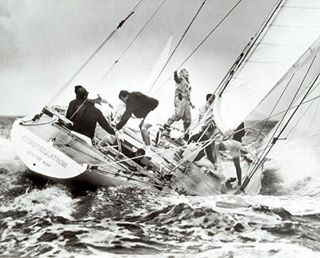 The father of the man who sold the watch first in an auction was the Skipper of the 1967 crew of the “Constellation”, a yacht that exists some years and sailed in the America´s Cup 1964.

The “Constellation” was one of two boats of a the class of 12-Meter yachts and was the trial horse for the “Intrepid”.

Trial horse are yachts to use for the defense only if the “Intrepid” did not prove up to her potential. The reason was that “Intrepid” was a newly designed yacht, from the most famous yacht designer Olin Stephens. The result of eight models with 16 month of flow tests with more then 30 changes of the bodyshape.

The result “Intrepid” was the shortest “12 Meter” yacht with 19 metres length and got unusual two rudder – one on the tail like usual and the other one, a keel rudder was mounted at the end of the keel. That brought the possibility of more exact maneuver sailing and to be faster to sail on a close reach. The other thing was that the whole crew were working in hatchways and just be with the upper part of body over the deck and two men are under deck the whole time to do the winches for spinnaker and jib sheets. With that the yacht got a deeper balance point and so a smaller aerodynamic resistance. 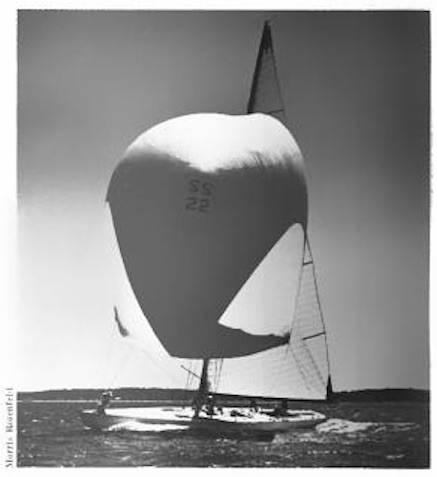 Together with the “Intrepid” the “Constellation” was ready to sail (as defense) the America´s Cup 1967.

So now the big question was: who was the Skipper of the crew of the “Constellation” in 1967?

The answer was found through the web Mr. Stephen Lirakis.
He seems to be a sailing maniac and give me the hint to search for the crew list in this archive: http://herreshoff.org/achof/

So the name of the Skipper of the Constellation was easily found.

He was a icon of Sailing in the U.S.: Mr. Robert W. McCullough.

He skippered the “Constellation” in 1967 and was later the Skipper of the “Valiant”, “probably the only bad 12 Meter Olin Stephens designed,” says David Ellwell, who was on McCullough’s crew. Again, Intrepid became the defender. McCullough went on to manage the Courageous syndicate that defended the Cup in 1974 and then was chairman in the 1980s of the New York Yacht Club’s America’s Cup Committee.

So it´s most likely the Aquastar Heuer Reagate “INTREPID” was belonged to Robert W. McCullough.
And his son decided to sell the watch after the death of his father in 2007 at the age of 86.

Possibly based on that success of “Intrepid” and the interest for timekeeping in different kind of sport activities had inspired Heuer to produce the great line of yachting wristwatches and starting with the Regate Felsa 4000 the Heuer spectrum of regatta watches went a long way till today, with building the nicest watches like the Heuer Skipper and the Heuer Regatta.

Let´s start a roll call for the Aquastar Heuer Regate, there are not many to find. Here are the known serials:

Some more facts about the America´s Cup and the boats will follow next.

One more thing: I never saw color pics of the INTREPID. But have a look what the color of the deck and the Skipperera have in common. DANG!