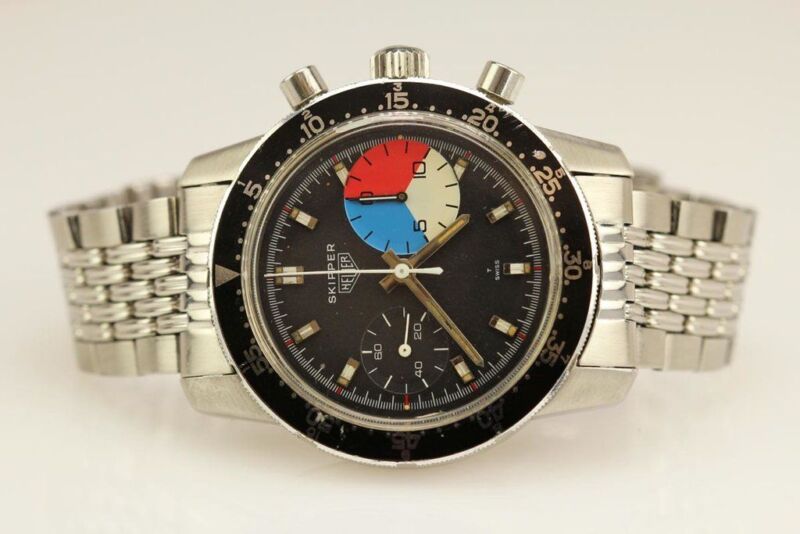 What 7764 is that? Let´s find out step by step.
First view – all ok: bezel, dial, movement, crown, pushers, doublegrain bracelet. OK, the case and caseback are polished near to death, caseback lost the fine engraving. But Skipper are toolwatches and mostly really rocked. And if the watchmaker doesn´t have the sensibility for old watches it can happen that a case will be overpolished much too much.

Now remember the early prototype?! You can read all here.

1. So why not should be there another Skipper with such an early serial?

There is no reason. Serial matches in the year. 7764 Skipper were build just in one year, 1969. Matches with the Mastertable of 7763C (nearly…) Just with the early ones, but possible. 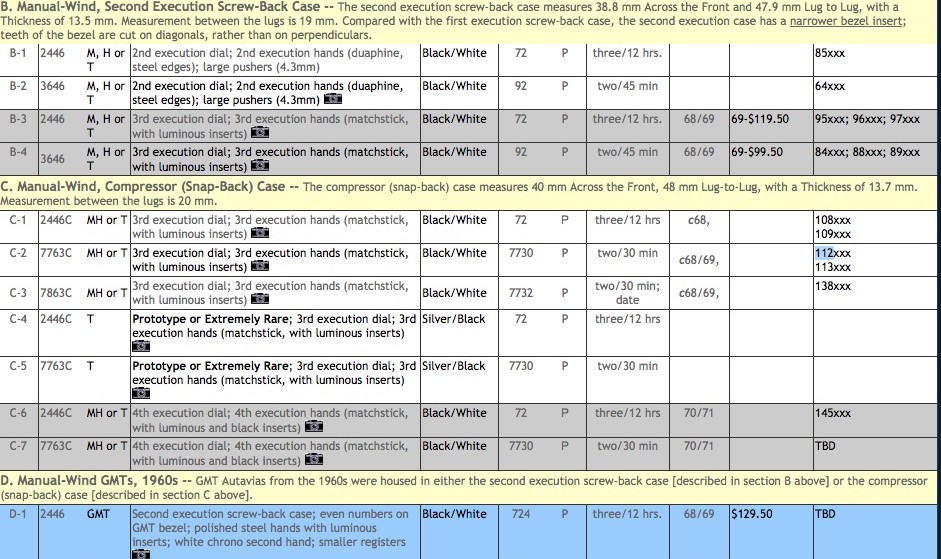 And – built together with early 7753 case or not? What seems legit and genuine?

What reason somebody should have to built together an early serial case with a good looking skipper movement and dial – and hands? Any chances having parts?

All in all it´s just interesting in the last two years because the Skipper values are increased rapidly. 3 years ago 2k€. Today 10k€. Autavia 7736C just moved less the half.
Would be a reason for having an old Skipper with bad case and build in an early case 7736 of an 7736 watch.

2. The hands will make it more clear.

At first there is a small difference to all known 7764.
The small left subdial hand is thinner on this new find one. On the prototype is the same a tick bigger one as in the later ones with red triangle sweep hand.

Now compare to the cataloge print – thin needles on the subdials. Checked.

The Skipper on this cataloge looks like a graphic – but: white sweep hand, small needles.

OK – the regatta needle is a complete different one, but as far as we know mostly the cataloges were printed with graphics before production. For a good readable countdown during a regatta start you need a special hand for a fast look, and there was a nice one designed for the real production of the Skipper.

But nice little proof of the sweep hand, right? 😉

And last – the main hands looks like blank ones too on the ad – like on this Skipper as well as on the prototype! No black lines behind the lumen like on all later 7764 with later serial.

2 Skipper 7764 with very early serials (111xxx/112xxx) with same main hands and sweep hands. Fitting to the cataloge from Heuer.

Of course there is a chance that somebody got an old Skipper with bad case and put it in a 7763 case with early serial. And got a white sweep hand too. Who knows.
But the chance is much more less then 50% to me, the likelihood of an built-together Skipper at all is very small. It makes no sense.

All in all – we believe this Skipper is nice and beautiful and legit. Can´t explain the low serial right now till now – but nobody can do, even Jack Heuer and his old master watchmaker didn´t remembering many details about the production of the Skipper as we asked him.

Now we are searching a third one to have a real proof of an early Autavia Skipper 7764. Surely there is another one.

This Skipper will come to the market next on http://www.matthewbaininc.com