Gallet has a big history in yachting chronograph watches and lots of other chronographs with time recording mechanism.

Some points of the large history of Gallet:

Starting the history in 1466 with Humbertus Gallet the family of Gallet were established during the time as a clock maker, watchmaker and goldsmiths. In the beginning of the 20th century (1915) Henri Jeanneret-Brehm Gallet creates watches for military and medicine purposes for World War I.

In 1918 Jeanneret-Brehm manufactured under the brand “Excelsior Park”. Excelsior Park and Gallet developed a number of time recording mechanism including the calibre 40, which was utilized almost exclusively in Gallet and Excelsior Park wristwatches. A small number were supplied to Girard Perregaux and Zenith companies.

In 1983 Excelsior Park closes the factory in cause of the “quartz crisis”. Gallet overtake the inventory and assets to support the owners of Excelsior Park movement watches. 1984 Flume tried to bring up the brand to the market – unsuccessful.

The whole line of history you find here.

1915 Gallet launched the “world´s first dedicated yachting stopwatch” with a startcountdown of 5 minutes. Inside works a high-grade 15 jewel Gallet colum wheel movement with temperature compensation bi-metallic balance and Breguet overcoil hairspring. It was possible to adjust to 6 positions and temperatures.

Update 08/2014: Since the discovery of the Berna patent and advertisment it´s proven, that the “first dedicated yachting stopwatch” was the Berna 5-dots from 1914. Maybe there was a marketing race of Gallet and Berna – or just a mistake in declaiming the “world´s first” from a website of Gallet. That´s not sure… 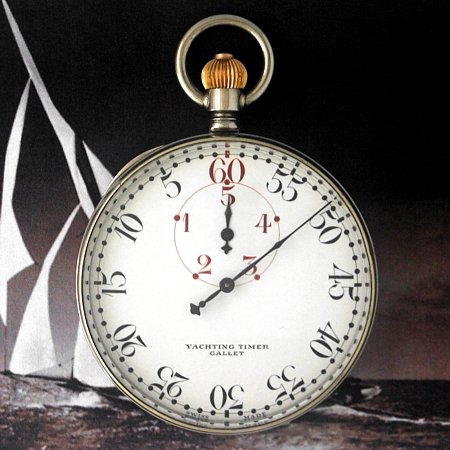 In 1945 the first wrist chronograph with regatta countdown (self declaimed by Galletworld.com) was launched as Gallet MultiChron. Inside works an extra fine 17 jewel Gallet chronograph movement with temperature compensation bi-metallic balance and Breguet overcoil hairspring.

The first Gallet MultiChron Yachtings were build with movements from Excelsior Park – a modified version of the Exelsior Park IV (aka EP4).

It could be – (source galletworld.com), that there are two different case sizes, but the date of built isn´t proofed. The EP4 was produced a longer time between 1940´s and 1960´s and we just can suppose with the “GALLET” brand on the dial, that the ones with GALLET over the middle are the more older ones. From known catalogues of this time you can see mostly the Gallet-watches dials with the brand there.  If you can add some informations, please just send a message here. 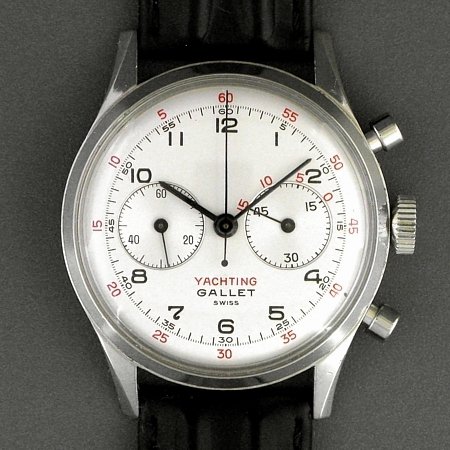 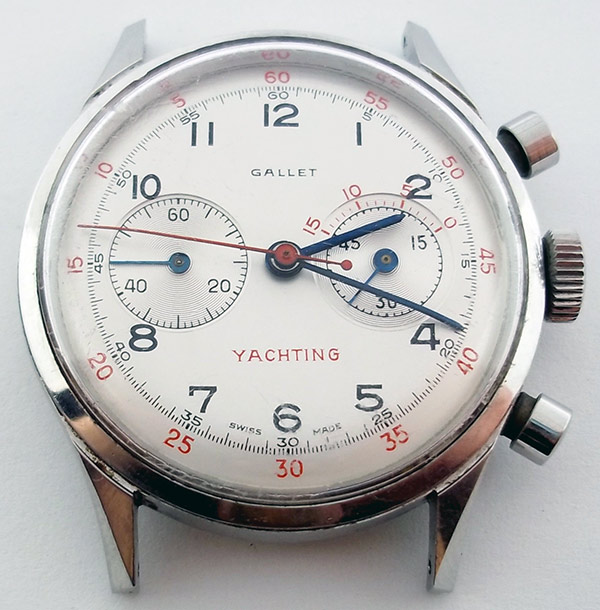 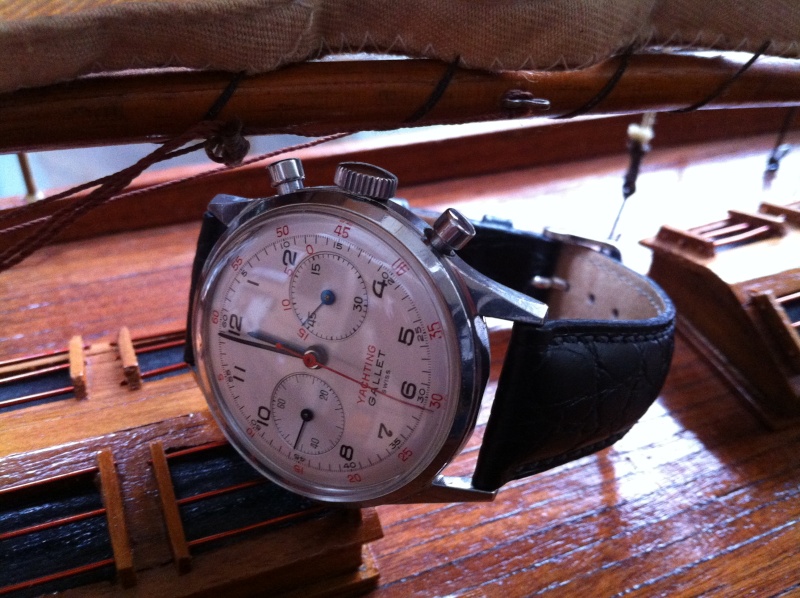 And there is one of its kind, a colored subdial on one of these early Gallet Yachtings known. Looks very genuine and well made. Maybe we see here the very first colored subdial for yachting on wristwatches. Need to be researched more if possible. 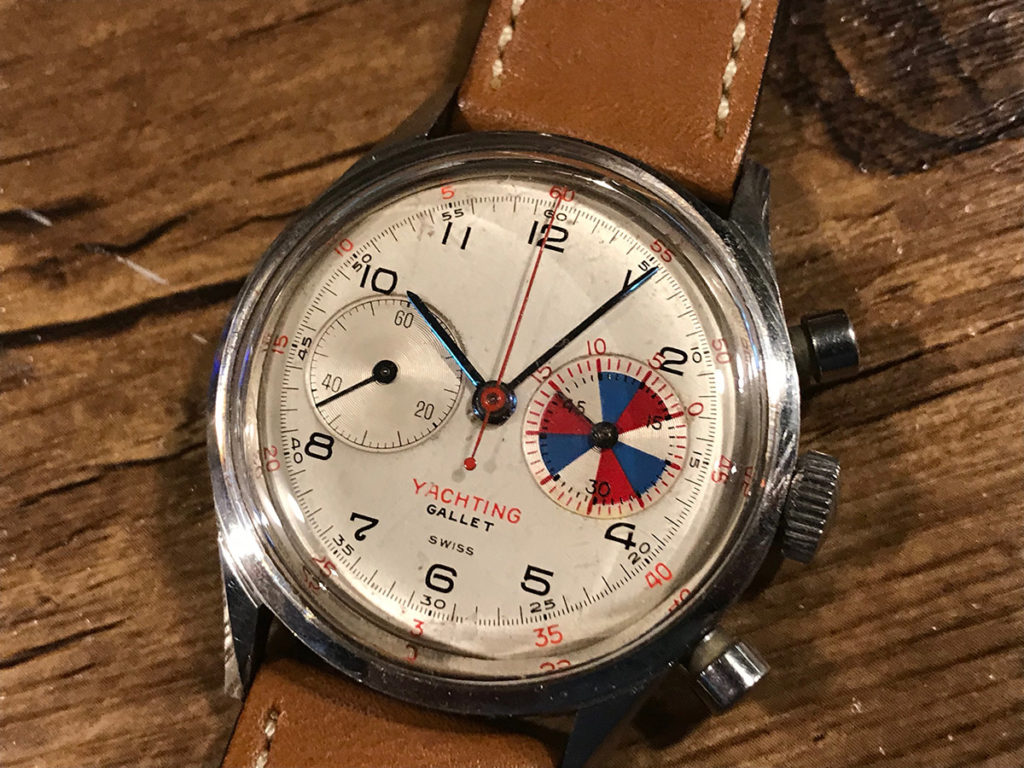 In the 1950´s was launched a special MultiChron Yachting Timer, a stopwatch to wear on the wrist.
Inside: Excelsior Park movement, water resistance 10 meter. 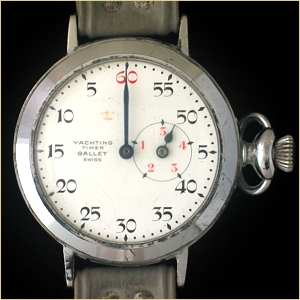 In the 1970´s Gallet launched a new MultiChron with the Valjoux 7730 movement. Not sure what the different bridges will causes, next term for the research.

Two different cases are known, snap case back and later the screw case back. Need to be researched too.
No visible differences of dial/hands on both executions. 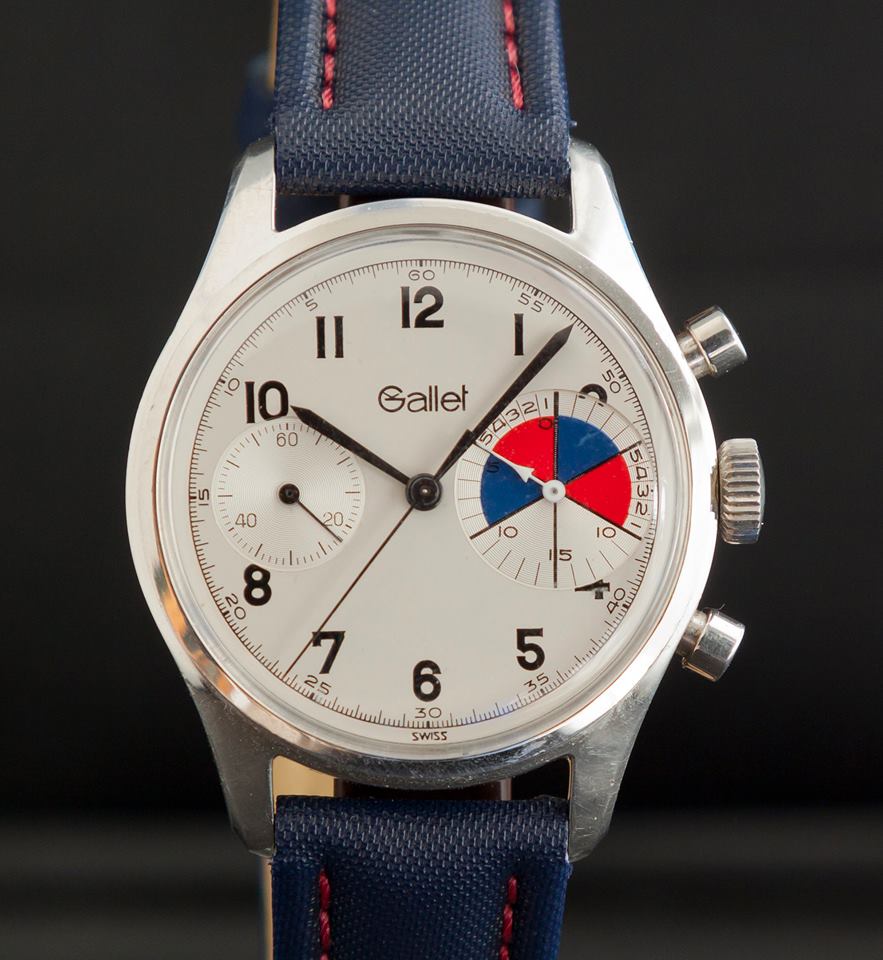 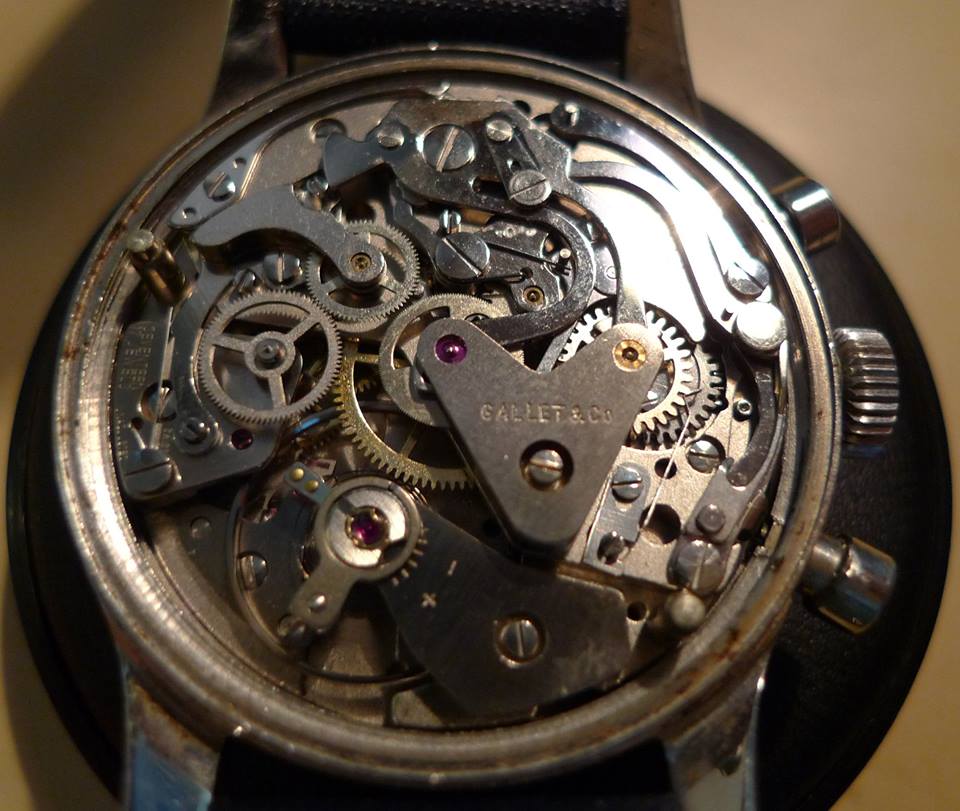 Here is another bridge in the same watch. 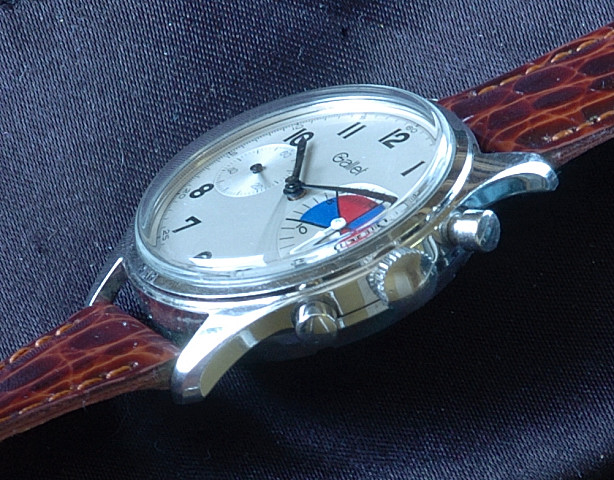 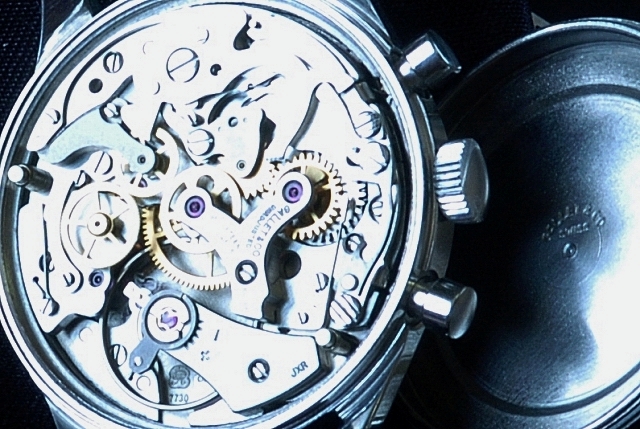 Next to the white dial Gallet you find the much more rare black dial one. Only 3-4 pieces are known for now.

All known black dials are running a Landeron 149 movement. 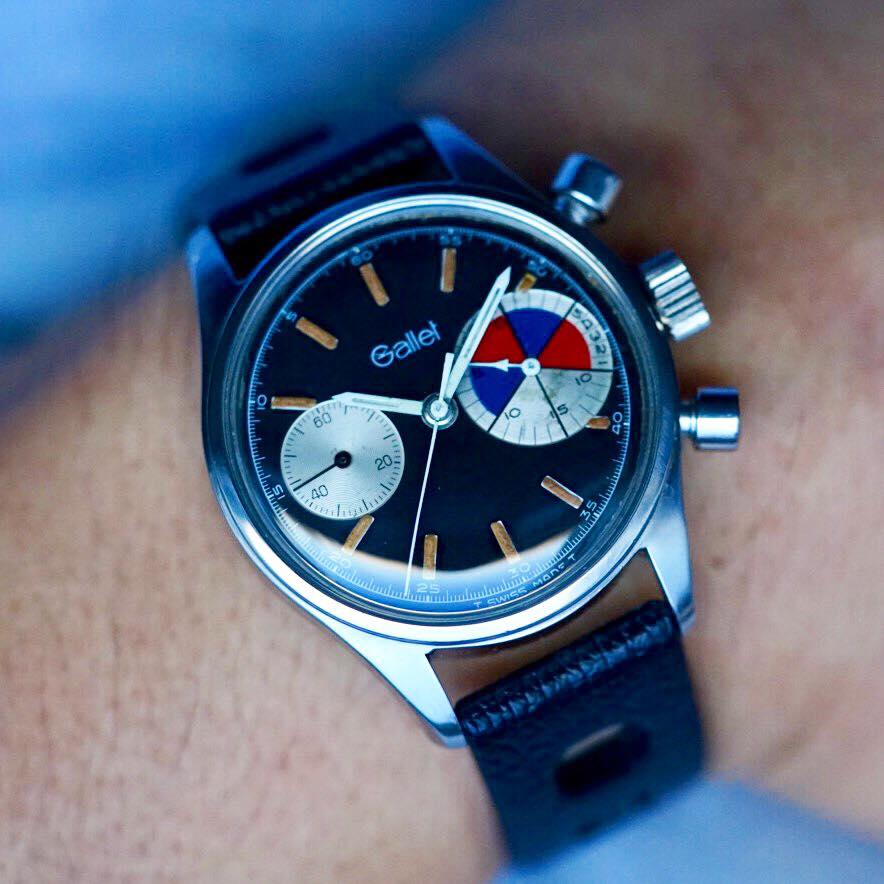 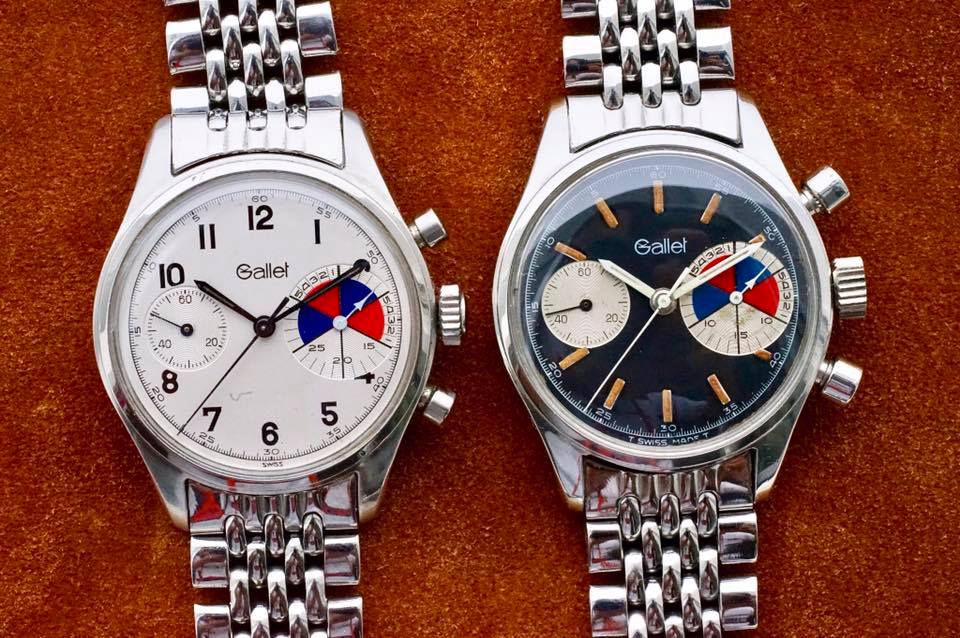 Gallet white dial with Valjoux 7733 and the black dial with Landeron 149
credit: Thien

On this catalogue page you find these regatta watches made by Gallet all together. 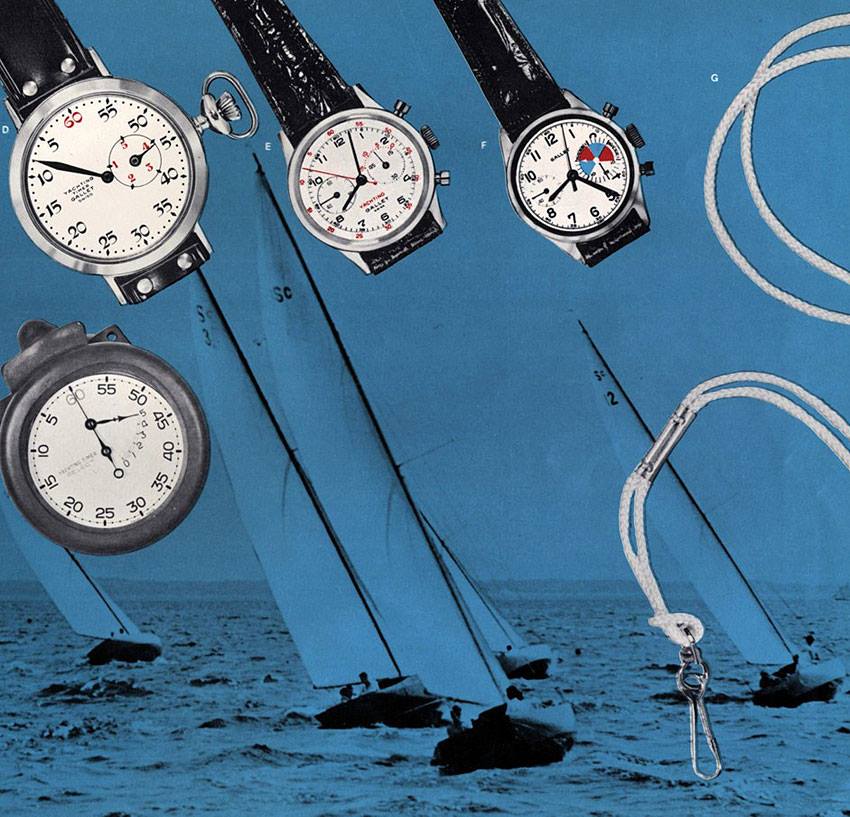 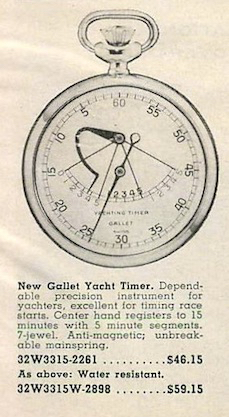 And there are some other yacht timer produced.

Nice to know: one highlight in the history of watchmaking of Gallet was in 1939 comes to the market the worlds first wristwatch to combine time zone (48 major world cities printed on the dial) housed in a water resistant case to allow the pilots to calculate fliying across longitude lines.

The Flight Officer aka “Flying Officer” has always been a relatively expensive timepiece for limited military budgets. Senator Harry S Truman recommended the watch as a requirement for pilots of the US Army Air forces during WorldWar II. He personally wore a Gallet Flight Officer  as America’s 33rd president.

A big thank as source of pictures and text to Galletworld.com and to Daniel Horton for sharing his nice research. Thanks to Thien and JMG Hors l’eau j’erre for the pictures!

Please send more stuff if you have some to ad! (background, advertisments, catalog-scans, text and pictures)!